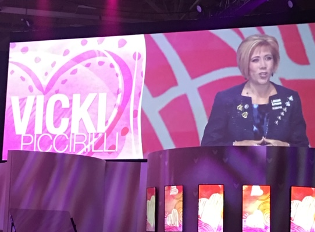 It just so happens that one of the top Mary Kay managers in the world is also my sister, Vicki Piccirilli (I think it’s safe to say Sales runs in our family).

Needless to say, Vicki is a big deal. Mary Kay generates over $3.5 Billion in worldwide sales annually, and Vicki is one of their most successful consultants in the world. I had the honor of watching Vicki receive the award for the “Queen” of the North East United States for her division at the annual Mary convention in Dallas a few years ago.

In terms of dollar and cents, this meant that her team generated over a million dollars in retail sales, only one of five divisions in the whole country to break the prestigious million dollar mark in sales.

However, in terms of lives impacted, this meant Vicki had spent the last fifteen years building a team of over 240 like-minded women and then found ways to inspire them to work together to accomplish incredible results.

As I walked around the convention and hung out with my little sister, women came up to her and asked for her autograph and picture. Vicki was always gracious and happy to oblige. Little did I know that when I drove Vicki to her Senior Prom all those years ago, that she would become such a Rock Star in business, and such an inspiration to so many women who would like to follow in her footsteps.

I asked Vicki to write this blog about recognition and reward programs because this is the foundation on which Mary Kay is built and Vicki has excelled in spotting sales talent and then inspiring her team to believe in themselves and reach their potential.

Vicki and her Circle of Excellence unit earned the Top Sales Director trip to Costa Del Sol, Spain their first full year as a unit. Since then, Vicki has earned the Top Director trip to Monte Carlo, Monaco, London, Venice, Rome, Vancouver followed by an Alaskan Cruise, Chile, and Argentina, and this year to Hawaii for the second time as a MILLION DOLLAR DIRECTOR!

The Piccirilli Pearls of Promise were recognized as the #1 Unit in the entire Sapphires Sales Division both in 2016 and 2017, making Vicki the 2016 and 2017 Queen of the her division.

Vicki is passionately driven to inspire other women to reach their God-given potential while building the Million Dollar Piccirilli “MORE THAN ENOUGH” National Area this year! Please enjoy her blog which comes from her firsthand experience in recognition and reward programs that help authentically show appreciation and help foster talent and maximize success:

Creating a Winning Culture With Recognition and Rewards

For over 16 years, I’ve had a business with one of the most successful, positive, motivating, and inspiring Direct Sales companies in the world.  Over these years, I’ve not only personally benefited from this unique environment created by Mary Kay Ash and her vision, but I’ve also learned a lot about how to create a long-lasting culture that everyone hungers to be part of.

One of the most foundational values of the Mary Kay culture is to ‘praise everyone to success’.  Mary Kay believed that when you focus on, recognize, and celebrate what you want more of, the less desire-able behaviors and attitudes will melt away and become practically non-existent.  I have experienced this truth first hand!

As I have built my organization, I have learned to expand and capitalize upon these basic principles which has in turn created a culture of fun, success, celebration, positive recognition, and therefore consistent wins. They say that leading a volunteer organization is the purest form of leadership and leadership is influence.  In the Direct Sales industry, success depends on grasping and mastering these truths.  Because we don’t directly compensate those in our organization, we have to inspire them to perform at their highest capacity simply because they desire to be their best and want to be recognized for it.  There are many different ways to recognize people and using all of them at the right time, in the right way with the right person is key to creating a healthy culture.

The most basic form of recognition is verbally praising someone for what they have accomplished.  This can be done privately and/or publicly.  Understanding what that individual would prefer is important if you want it to be effective.  Some people enjoy both the public and the private recognition.  Your ability to be authentic while praising someone else will make or break your success.  If you are harboring annoyance or frustration with the person you are trying to praise or you really don’t feel that they did a good job, that will come across and you are better off not saying anything.

A second way to recognize others is to create a celebration for them.  This is best done with a group of peers and you may be able to recognize multiple people at one celebration.  Mary Kay Corporate has become the world’s greatest expert at this type of recognition. They have an annual Seminar in Dallas, Texas during which they have an awards night.  The awards night is 6 or so hours of constant praise and recognition along with over $5 million dollars of prizes (mostly diamonds) being awarded to their top producers.  Complete with first class entertainment and music, the entire sales force dresses in formal attire and they crown Queens who share inspiring words of encouragement.

It feels like it’s the GREATEST celebration on earth!  I have earned over 50 carats in diamonds, 8 first class trips for me and my husband around the world, not to mention 10 cars, 8 of which have been pink Cadillacs.  Although the awards celebrations I organize for my group aren’t quite as grand as Seminar, I use the same concepts to create excitement and joy and ultimately the desire to come back next year as a winner, if not the Queen.

Another form of recognition is sometimes a little more difficult to cultivate since it requires intentional character development on the leader’s part, as well as trust and credibility to be built with those you lead.  It’s called affirmation and for affirmation to be truly effective, it needs to be relationship based.  Affirmation is recognizing, praising, and affirming a person’s character, not just what they have accomplished.  For instance, if I have a consultant that has achieved greatness, I can recognize her by praising her accomplishment, but if I add on affirmation of her character, it takes the recognition to another level.  Especially if I do it publicly by saying something like:

“Phyllis, not only are you our number one in sales this week, but the perseverance you displayed by overcoming all of the abnormal obstacles you had this week make this win even more meaningful.  Phyllis, you are a testament to focus, tenacity, and commitment and I’m proud to know you, as well as to have you represent our organization this week as our number one sales woman!”

Now, saying that to Phyllis instead of saying “Wow, Phyllis, congratulations on selling so much this week! You’re an amazing sales woman!” is not only going to inspire another great week from Phyllis, but it’s also going to inspire everyone else in the room to overcome their own obstacles and do their best despite any excuses they may have.

The beautiful thing about creating this type of culture is that it propagates itself.  All of a sudden, you will notice your entire organization recognizing, praising, and affirming each other.  Eventually it becomes an environment where no one has anything negative to say about anyone……only what is noble, respectful, honoring, pure, and edifying is said.  Now, that is a place where everyone wants to work, give their best, and become their best.  What could be better?