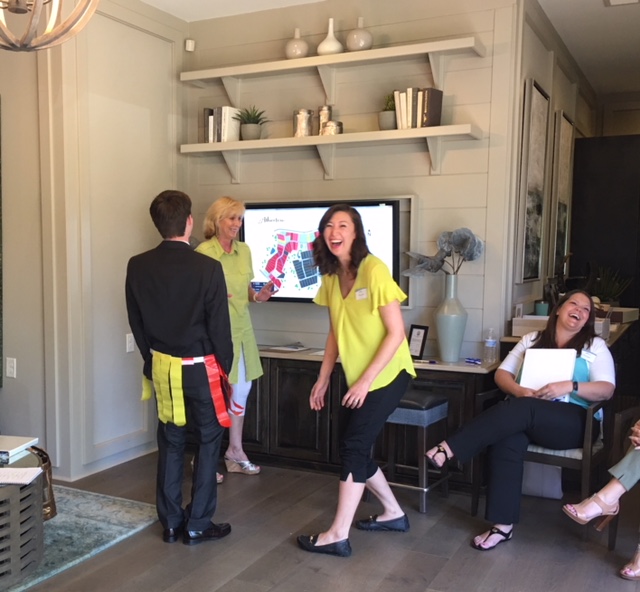 Real Sales Training is About Action

When I get phone calls for new home sales training, my real goal as a teacher and coach isn’t just to provide a cute and funny program, but to help every single attendee develop and grow, and realize true transformation.  Whether you are a seasoned pro, a rookie, or, like most salespeople, somewhere in between, the way to truly improve your skills is to get out of the classroom and practice.

I was being purposeful when I named my company New Home Sales “Coach”. I have learned that while the classroom training I provide is jam-packed with strategies and processes that are proven to work and help you sell more homes, there is only so much you can learn in a seminar-type setting. Think about anything you have learned to do well, from riding a bike as a toddler to later playing an instrument, dancing, acting, swimming, horse riding, or any sport.  You didn’t accomplish it by reading a book or being told how to do it; you took action and practiced.

When riding a bike, you probably had a few scraped knees.  If you were playing an instrument, you hit plenty of discordant notes.  When dancing, you may have trodden on plenty of toes (Ouch!). However, you practiced repeatedly until you overcame your fears and became comfortable. Who remembers the feeling when you finally took the training wheels off your first bike? Or how proud you were when your children grew up enough to ride on two wheels for the first time?

In his book, Outliers, Malcolm Gladwell states that the most accomplished people in any medium, such as The Beatles writing and playing music or Bill Gates writing computer code, share the unifying element that they practiced for at least 10,000 hours.

As much as this makes sense, most of us hate to practice and would much rather just try to implement what we have learned in the classroom directly with a client, hoping that it will all come together for us. I get it, most of us hold our noses at the concept of dull educational methods.  Winston Churchill famously said the following about education: 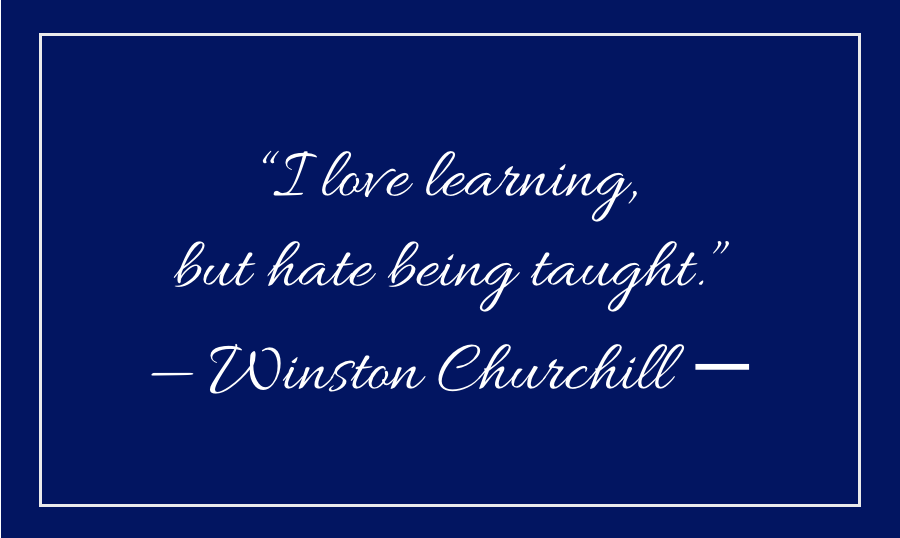 Often this aversion to new home sales training is because of past negative experiences. For the record, back in my day as a younger salesperson, I had plenty of bad training experiences too. Either from sales managers or coaches who had no real experience in the field or their style was too abrasive, condescending, and more about them, as opposed to genuinely caring about the growth and development of me and the other new home sales students. 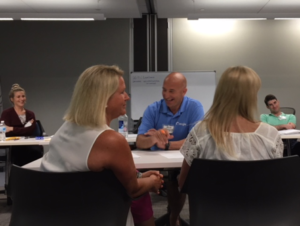 Rick sharing his closing prowess and humor with Beth and Vicki at Eagle Construction.

By the way, being open to training and wanting to grow isn’t a sign of weakness, or evidence that we are unsuccessful in some way and in need of remedial help. On the contrary, when I was actively selling homes in one large community in South Florida for almost a decade, my yearly sales were between $15M and $20M and I was always in the top four to five salespeople in Palm Beach County, as published by our local Sales and Marketing Council (SMC).  I would frequently pay for my own training and embrace the opportunity to develop my skills and grow.  For example, I attended many classes provided by our local SMC, such as the Certified Sales Professional (CSP) course.

Interestingly, can you guess who else attended the very same classes?  You guessed it, the other four or five salespeople who were in the top tier of selling already, just like me.  After I got over the fact that I wouldn’t have a competitive advantage over my peers, I realized that the true message was that “Success is Not an Accident”. My successful new home sales peers and I were hungry for knowledge and always curious about growing.  As Dr. Covey discusses in the 7 Habits of Highly successful People, we were all taking the time to “Sharpen our Saws”.

Are you ready to dive into new home sales training?  In order to help make coaching fun and effective, here are three quick coaching tips I have learned from many years of high level selling, managing, and coaching.

Make sure that your team looks forward to training by creating a fun and relaxed atmosphere. If salespeople are stressed or anxious, they will never embrace coaching, and we won’t be able to help them realize their true potential. 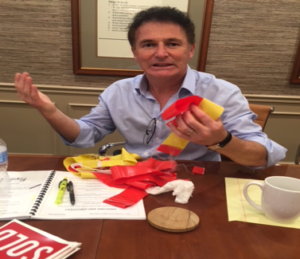 Who Broke My Belt?

ACTION: Keep it light and breezy, so that your sales team will actually look forward to coaching and role playing. That is why, at New Home Sales Coach, we have created all sorts of training props, such as belts, balls, and more to help distract from the tension of role playing, and cause salespeople to laugh while they learn.

How many times have we heard from reticent sales people: “I am not good at role playing, I do much better with clients.” I don’t blame them, as I would personally much rather work with a tough buyer than face ridicule from a new home sales trainer who could embarrass me, especially in front of my peers. So, let’s create games, involve everyone on the team, listen to each other, and make training a fun experience. 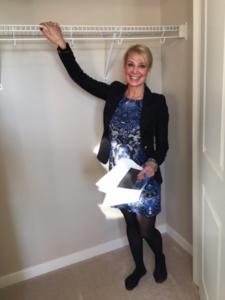 As soon as a role play is over, immediately discuss the specific elements that the salesperson did well. I have learned that, to keep it credible, the feedback should be objective, specific, and sincere.

ACTION: Ask others on your sales team to chime in with their positive feedback as well.  This will quickly teach the sales team to be supportive of their colleagues and lessen the pressure when it is their turn to perform.

ACTION: Award prizes for best role plays, best answers to questions, and genuine engagement in the training. Something like a gift certificate for coffee, a car wash, or motivational books can all work well.

As painful as it may be for you, as a coach, to be direct and risk hurting someone’s feelings, in order to help the salesperson develop, you owe it to them to be candid when they need to improve. I have observed that if you flatter a salesperson when they know they didn’t do as well as they could, it confuses them, makes boundaries become fuzzy, and undermines the veracity of the training.

Many years ago, I was working with a builder in Colorado Springs managed by a good friend of mine, Scott Baughman. We were role playing with a very eager, but fairly inexperienced salesperson named Deb. Deb hadn’t sold a home in over six weeks and we were role playing in a model home. Deb was doing a lot of telling and was forgetting to ask me how I felt about what she had just said. I stopped her and asked her to try again, but this time to please involve me and get feedback from me. We tried again, but sadly Deb defaulted back to telling and failed to ask me any questions. This time, I role played with Scott and showed her what we had in mind. Deb tried again, it was slightly better, but not effective enough to have worked well with a customer. We patiently pointed this out and said “Why don’t we try again?”, at which time Deb started to cry.

Anyone who knows me understands that above all I am a coach, I genuinely care about the development of all of the salespeople with whom I work, and I would never hurt anyone’s feelings intentionally.  Having said that, I understand that when we become frustrated with ourselves, some of us wear our emotions on our sleeve and it can be hard to stop the water works. Deb tried again and she started to improve. We role played in other parts of the home and Deb became far more empathetic, listening and involving much more than she had at the beginning of the coaching session. You could see her self-confidence start to grow. A few weeks later I received this interesting email from Deb. She said: 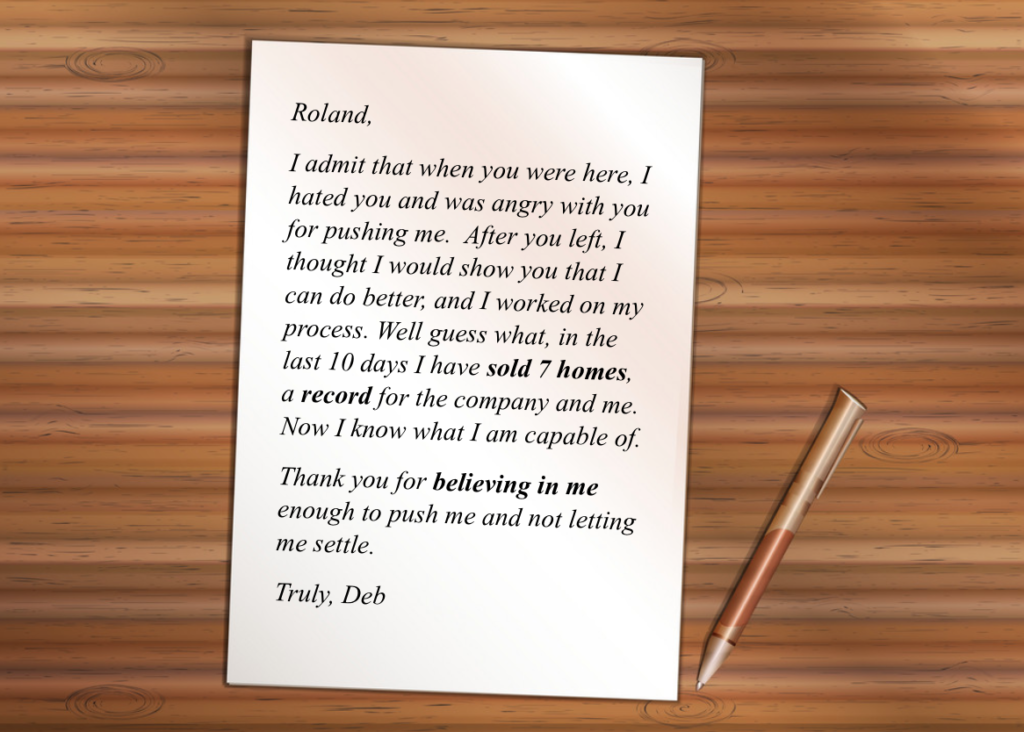 ACTION: As a coach, you have to care about your salespeople enough to be unreasonable and to ensure that they practice perfectly, so they can realize their true potential.

Who is the Sales Coach on Your Team?

Often it is the sales manager/director who is expected to be the sales trainer and coach. This clearly works if the manager understands the sales process, is able to teach it, and has the time to commit to coaching the salespeople. 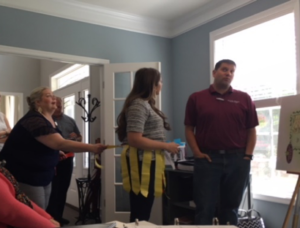 Olivia East, successful salesperson and self proclaimed “Belt Whisperer,” role playing with TJ and Kasey of the delightful Atlantic Builders Team in Fredericksburg.

Working with builders of all sizes across the country, I have found that sometimes this just isn’t practical, as managers are busy doing all of the transactional things needed on a daily basis to keep making sales and ensure the company runs smoothly. If this is the case with you, then find someone qualified on your team who is successful in sales, has a replicable sales process, and would like to help teach their teammates to succeed. I was this person and I remember that when I was actively selling, I had written a lengthy training manual combining what I had learned from other trainers with what I had developed myself.  Then, I asked my sales manager if I could host an evening of training.  Thankfully he said yes, and I realized how much pleasure training and coaching gave me.  I work with a few home builders across the country who have talented people  on their team who are ready, willing, and able to help coach the whole team, and who are hitting it out of the park with training.

My travel schedule, as always, has been very hectic and in the last few months alone, I have had new home sales training visits to Charlotte, North Carolina, Holland and Detroit Michigan, Oyster Bay, New Jersey, Fredericksburg and Richmond, Virginia, and Lady Lake, Florida, not to mention video conferences with builders all over the country, including Fargo, North Dakota.  As a new home sales coach, I love to get out of the classroom and have some fun by role playing every aspect of the new home sales process. I have been fortunate and have seen some excellent sales performances with all of my teams. 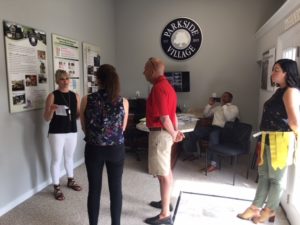 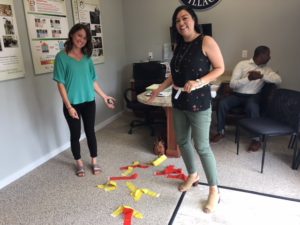 Katie does so well that Coach Megan runs out of flags.

Having said that, we just recently had some exceptional role plays that, as a group, truly stood out from the crowd.  As usual, many of this team’s salespeople began by being very nervous, understandably dreading the notion of role playing, especially in front of their management team, me, and their peers. My job as a coach is to help them relax and just be themselves, so we can bring out the best in everyone. That is why you will see my goofy patented new home sales training belt in so many of these pictures to try to turn “Roly Playing” into a fun game and an enjoyable experience that we can all embrace to help us grow. 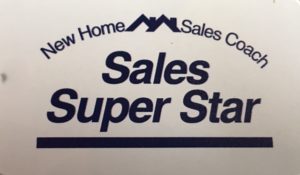 It was obvious that this team worked so hard on their sales process, as the growth from my previous visit a few months ago was literally exponential. They were each friendly, focused, and highly effective. So my award for this month’s stand out “Roly Playing” goes to the sales team at Eagle Construction in Richmond Virginia.

Thirty cans of New Home Sales Coach “Sales Super Star” mints are on their way to you.